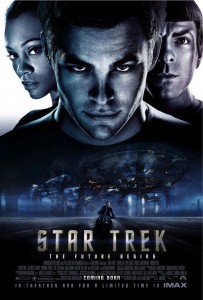 The greatest adventure of all time begins with Star Trek, the incredible story of a young crew’s maiden voyage onboard the most advanced starship ever created: the U.S.S. Enterprise.  In the midst of an incredible journey full of optimism, intrigue, comedy and cosmic peril, the new recruits must find a way to stop an evil being whose mission of vengeance threatens all of mankind.

he fate of the galaxy rests in the hands of bitter rivals born worlds apart.  One, James Tiberius Kirk (Chris Pine), a delinquent, thrill-seeking Iowa farm boy, a natural-born leader in search of a cause.  The other, Spock (Zachary Quinto), grows up on the planet Vulcan, an outcast due to his half-human background, which makes him susceptible to the volatile emotions that Vulcans have long lived without, and yet an ingenious, determined student, who will become the first of his kind accepted into the Starfleet Academy.

Kirk and Spock could not be more different.  Yet, in their quest to figure out who they really are and what they have to give to the world, they soon become competitive cadets-in-training.  With their drastically opposite styles, one driven by fiery passion, the other by rigorous logic, they also become defiant, contentious adversaries, each equally unimpressed with the other, each going all out to be among the special few chosen to join the crew of the most advanced starship ever created, the U.S.S.  Enterprise.

In the midst of it all, Kirk and Spock will come face-to-face with an undeniable destiny:  a need to forge an unlikely but powerful partnership, enabling them to lead their crew to boldly go where no one has gone before.