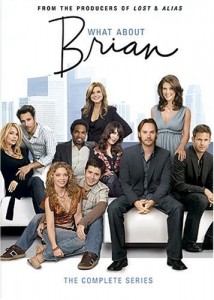 Summary: From the producers of Lost and Alias and the screenwriter of City of Angels and For Love of the Game comes a contemporary, heartwarming ensemble show about a group of supportive friends in various stages of romantic relationships and friendships living in Los Angeles. There are the just-married Nic and Angelo, the seemingly happily married Dave and Deena and the newly-engaged Marjorie and Adam. But — what about Brian? Of this close-knit group of friends, everyone else has paired off, while Brian has emerged as the last bachelor standing.

At 34, regardless of his run of bad luck in matters of the heart, Brian still holds out hope that one day he’ll open the door and be blinded by love. However questions about his fate have been popping up more frequently in his head. The most pressing question is – and it’s one that only he can answer — could all of his problems stem from the fact that he is harboring a crush on the picture-perfect Marjorie, his best friend’s girl? Adam, Brian’s best friend since childhood, was going to break up with Marjorie but found himself proposing to her instead. He’s a lawyer and Marjorie is a pediatric surgeon. Their busy lifestyles leave them little time to plan their upcoming wedding and, oddly enough, that seems to have given them more time to re-evaluate whether they’re indeed doing the right thing. Brian’s fortysomething sister, Nic, and her boy-toy husband, Angelo, are trying hard to start a family, but something’s not right. Nic’s high-stress work as a record executive and Angelo’s fledgling acting career have created some anxiety in the new marriage. Now they’re torn between conceiving a child the old-fashioned way or using modern medicine to speed up the process. Dave, who runs a video game business with Brian called Zap Monkey, is married to stay-at-home mom Deena. They’ve been together for 13 years, have three little girls and a lackluster sex life. This prompts the frustrated and unconventional Deena to suggest to the more content Dave that they consider having an open marriage. Like all married people and their single friends, they can’t wait for Brian to join their “club,” though they’re not exactly sure why.