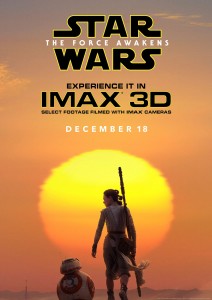 Recently someone claimed that Star Wars: The Force Awakens was fan fiction. If it is, then so are The Empire Strikes Back and Return of the Jedi. All three films share more than just actors. Writer Lawrence Kasdan co-wrote all three. He co-wrote Empire with Leigh Brackett, Jedi with George Lucas and Force Awakens with J.J. Abrams.

When I hear fanfic, I think “wannabe” and “not canonical” rather than acknowledging that it’s a true continuation of the story.

Yes, J.J. Abrams is a fan, but that’s not the approach he took:

But my job wasn’t to be a fan boy or an 11-year-old kid. It was to be a nearly 50-year-old movie director, so I tried to approach this thing from a point of view of obviously acknowledging how much I love what George Lucas created, but understand that being a fan doesn’t make the story work. Being a fan doesn’t make the scene any good. Being a fan is great, but we all had to be storytellers and filmmakers.

I was surrounded by people like Lawrence Kasdan, who’d written the Empire Strikes Back and the Return of the Jedi, and actors who had been there from the beginning, all the way through visual effects and sound of course John Williams, who collaborating with him is like cheating, ’cause he speaks to our soul with music in a way that I think is super-human. So the whole process was really about trying to love it but also be hard on it, so that the story meant something and was emotional and not just a fan film. (via Merlot Mommy)

Part of the argument was that it didn’t break any new ground. That’s simply not true. They introduced a strong female lead that is unlike any seen before in the Star Wars films. She’s basically the Luke Skywalker of this new trilogy in many ways, and it doesn’t even really matter that she’s female. She just happens to be so.

Honestly, I think the rest of the ground that Force Awakens has broken will be revealed by the sequels. It introduced a lot of questions, a new status quo with regard to the heroes and villains, and the repercussions of the destruction have yet to be felt.

Claiming that other fan fiction has been successful isn’t a good argument. Those fan fictions were only successful because they were renamed. They did not become part of the actual storyline. They had to become their own thing or they would never have achieved success.

The Force Awakens is now, forever, part of the Star Wars saga. By definition, fanfic can never do that. It ceases to be fanfic once it becomes an official part of the story.

Well, this is surprising. To no one. Disney is taking advantage of the December launch of Rogue One: A Star Wars Story to cross-promote a new Star Wars: The Force Awakens release. This time it’s Blu-ray 3D. […]