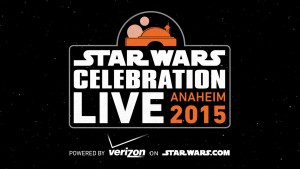 Star Wars Celebration is happening starting this Thursday. It is kicking off with a Star Wars: The Force Awakens panel that may feature new footage from the film! It’s also possible that the trailer that is attached to Avengers: Age of Ultronwill be shown.

Here are the details:

For the first time ever, highlights and more than 30 hours of exclusive video content from Star Wars Celebration Anaheim will be officially live streamed to a worldwide community of fans on StarWars.com, all powered by Verizon.

Launching with a live stream of the highly-anticipated kickoff panel featuring Star Wars: The Force Awakens director J.J. Abrams and producer Kathleen Kennedy, the StarWars.com Celebration live stream powered by Verizon will continue providing coverage throughout the four-day event from a specially-designed Star Wars Cantina set located in the middle of the action on the convention floor.

Between the live, on-stage events, StarWars.com will feature live interviews with celebrity guests within the Star Wars Cantina set specially built to capture the mood and atmosphere of the infamous Mos Eisley watering hole from A New Hope. These segments will have a fun, variety show flavor to them that brings a bit of the Star Wars Celebration vibe to those enjoying the event from afar.

Exclusive clips from throughout Star Wars Celebration event will also be available on demand from Verizon, allowing fans to celebrate Star Wars long after the live streams are over.

The live streaming begins at 10:00 a.m. PST, Thursday, April 16, on StarWars.com with the Celebration kickoff panel and continues with 30-plus hours of coverage through the closing ceremony on Sunday, April 19, beginning at 3:30 p.m. PST. Watch exclusive highlights and on-demand clips from Verizon on Twitter,@VerizonWireless, and at Facebook.com/Verizon.

Who is Crystal Clarke? She’s another new cast member for Star Wars: Episode VII who was found when Lucasfilm conducted an open casting call last fall. The casting calls spanned 11 cities across the US and UK […]