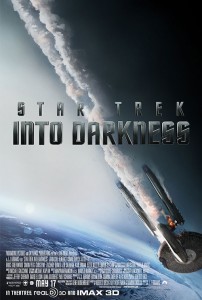 The title of the second J.J. Abrams Star Trek films, Star Trek Into Darkness seemed to confuse most who heard it – at least initially.  When I first heard it, I wondered if it were just a rumor or a temporary title.  It just didn’t seem to be “cool” enough.  Plus it used the actual title as part of a sentence that seemed descriptive.  It’s just just a star trek, but rather a trek into darkness.  My thoughts turned out to be right on the money, as darkness is what we got with the sequel.  It upped the ante and brought all of the characters to the next level.

Abrams recalled:  It’s odd. But my favorite thing about it was the first week it was out there, the fans were going, ‘Star Trek Into What? I don’t understand it. It’s stupid.’

He added to Total Film magazine: “It definitely feels like the title’s appropriate. This is a story about these characters being challenged and tested and taken to a place that’s about sacrifice and life and death …”

Producer Damon Lindelof added:  “If the first movie was about meeting and introductions, this movie is about becoming a family.  The title of the movie is not just about the mission that the Enterprise is going on but what happens when you get to know each other a little better and the hurdles you must jump over in order to truly become family.”

Paramount Releasing Star Trek Into Darkness Blu-ray with All Features

Last September, I wrote an open letter to Paramount about their release strategy for Star Trek Into Darkness on Blu-ray. As the months went on, I knew that it didn’t really go anywhere. However, it seems […]

Dear Paramount, Where are my Star Trek Into Darkness Blu-ray Features?

Dear Paramount, As you can probably tell, I’m a pretty big fan of J.J. Abrams’ films.  In fact, the only two Star Trek films I’ve ever seen are his.  I thought his Star Trek was […]