There’s a photo going around that people want me to share here, in the hopes that Abrams himself will see it. I doubt that Abrams even knows this website exists, but I’ll relent.

First, I will explain why I think there’s nothing wrong with the current Lightsaber, and then the problem with my thoughts on it.

The lightsaber has the cross beams, and people are saying “well that’s not going to stop any blade from sliding down and slicing through the hilt.” What if the material the hilt is made out of can stop the blade? It seems that it can focus the blade in whatever direction, so it stands to reason that it could also deflect the blade of another lightsaber.

Argument against? Other lightsabers have been sliced in two, including Darth Maul’s own double bladed lightsaber.

Argument for? According to super geeky source material, there are materials in the Star Wars universe that may deflect or even short-circuit a lightsaber blade. The substances are  phrik, cortosis and Mandalorian iron. In fact, Emperor Palpatine’s own lightsaber was made of phrik, as described in the Star Wars: Revenge of the Sith: The Visual Dictionary.

Therefore, the material the cross beam is made out of could very well be that same substance. Problem solved.

But, if Abrams and his team haven’t heard of such material, or don’t show any form of explanation of it (even a quick lightsaber short-circuiting upon impact will do), then perhaps there are other uses for the triple bladed light saber.

In really close combat, for instance, having those extra blades where they are could prove exceptionally useful in ways where diagonal blades would not. Perhaps there’s a very logical explanation that we’ve not seen yet. Something practical for why a lightsaber would be built in that manner.

All that to say, I don’t have a problem with the design of this lightsaber. I think it’s fine and I’m confident that the movie will show a practical application for the triple blades being at 90 degree angles, where they could be easily cut off.

And with that, I have to say this as well:

Before this, no one complained about lightsabers having no hilts before. The only reason people are even talking about it now is because one actually does. 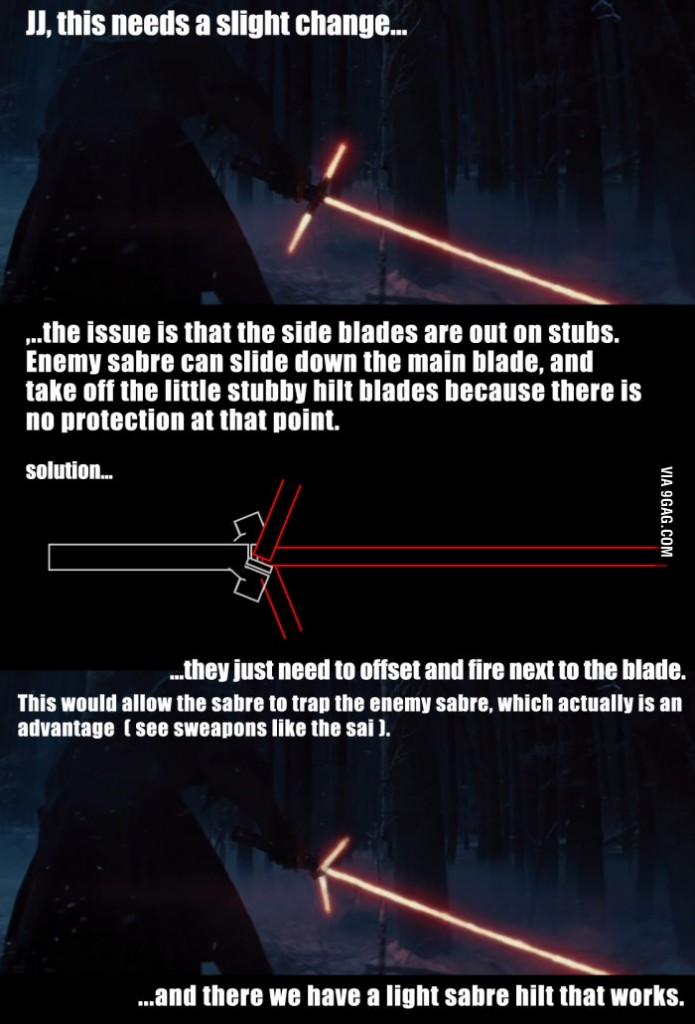 The problem with the #WheresRey campaign is that it was exceptionally misleading. I read that Rey was going to be more heavily included with series two of the Star Wars: The Force Awakens toys and action […]

The first round of characters from Star Wars: The Force Awakens have been named. Interestingly, but not surprisingly, the characters named are the ones that appeared in the teaser and no more. J.J. Abrams went on […]

Maisie Richardson-Sellers up for Role in Star Wars: Episode VII?

If she is cast in a role, it’ll follow suit with Abrams’ plan to cast relative or complete unknowns in Star Wars: Episode VII. The goal is to create a film where people don’t see people […]