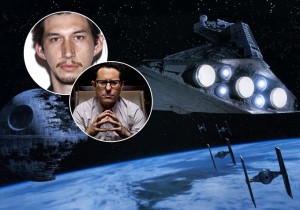 I’ve never heard of him, nor seen him act. I’m definitely not watching the show that he’s a part of. If this rumor turns out to be true, this will be the first time that I see him act. And, unless he does other wholesome movies or tv shows, it’ll be the last.

Adam Driver is close to signing on to play the villain in J.J. Abrams’ Star Wars: Episode VII. Exact details are unknown, but the character is said to be in the vein of iconic Star Wars villain Darth Vader. According to Variety no deal is done yet.

Disney was also rumored to be looking at Michael Fassbender and Hugo Weaving for the villain role. The studio had no comment on the cast. I’ve also heard rumor that Benedict Cumberbatch was also in the running, as well as Gary Oldman. Both of them might actually be involved in the film, though.

Who is Oscar Isaac?  He’s a graduate of Juilliard, and acted in movies like All About the Benjamins and The Nativity Story.  He also appeared, briefly, in The Bourne Legacy. It was his role in Drive that caught people’s […]

We’ve been patiently waiting for this announcement, and now we have it. Han Solo, Princess Leia, Luke Skywalker, C-3PO, Chewbacca and R2-D2 are all returning to the galaxy far, far away, along a new cast […]