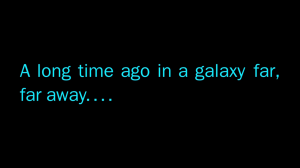 While talking to the Daily Telegraph, J.J. Abrams spoke about the secrecy surrounding Star Wars: Episode VII.  I love the idea of going into the next new Star Wars movies completely blind, but I also can’t wait to learn more about the sorts of characters and settings that the stories will revolve around.  Knowing a little bit about who the characters are, and what they’re going to be like isn’t the same as knowing what’s going to happen, afterall.

“I’m working on the Star Wars script today and the people in my office have covered up all my windows with black paper. I guess they wanted to make sure no one could see what I was doing. It seems rather extreme.”

And this point about all of the spoilers that are out there, thanks in large part to the internet: “We’re living in a moment of instant information and a sense of entitlement to that information. But I think it’s nice to remember that there’s nothing wrong with a sense of anticipation.”

Before the release of last year’s Star Trek Into Darkness, Abrams tried to keep secret the identity of the villain played by Benedict Cumberbatch – something he now regrets. “We were trying to preserve the unexpected for the audience, but it came across as if we were trying to be too clever,” he says.

“Star Wars is in every way a different animal. It’s always been a more open, fan-engaged universe than I’ve been used to, so I’m sure there’ll be some sort of compromise. But it feels to me like there’s a purity in not knowing every little thing.”

Who is Domhnall Gleeson? He’s the son of actor Brendan Gleeson. He’s done a few small roles, but nothing that I would call very large. He’s been in films like True Grit and has a leading […]