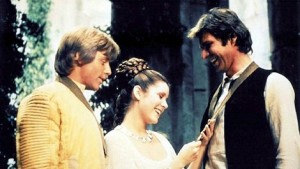 Shooting on Star Wars: Episode VII begins in May.  The script, written by J.J. Abrams and Lawrence Kasdan, is now ready, and pre-production is in full-swing. “We’re working really hard and we’ve got our script and we’re in deep prep. Full steam ahead, y’know.”

They are taking to many actors to flesh out the cast of the film.  While no official announcements have been made, Carrie Fisher has all but confirmed that she’ll be prepping to film in March or April, alongside Mark Hamill and Harrison Ford.

“I’d like to wear my old [cinnamon buns] hairstyle again — but with white hair,” she says. “I think that would be funny.”

As the movie gets closer to production, the idea of a new Star Wars is actually beginning to sink in.  Though I don’t think it’ll feel real to me until the first teaser is released for it.

J.J. Abrams is teaming up with Jonathan Nolan (brother and frequent collaborator of Christopher Nolan) on a remake of writer-director Michael Crichton’s 1973 film Westworld. It is a science fiction / western story with a […]

Welcome to Abrams Fans, a place for fans of J.J. Abrams and his many projects

August 5, 2013 Paul Martin Abrams Fans Comments Off on Welcome to Abrams Fans, a place for fans of J.J. Abrams and his many projects

J.J. Abrams is a writer, director, producer with so many projects in the works, that people wonder how he’s ever able to finish them all. I became a fan of his after getting into Alias […]