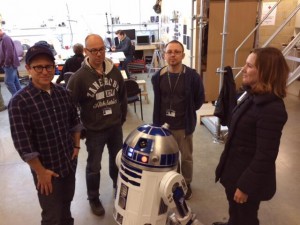 The rumors are true, R2-D2 will return in Star Wars: Episode VII.  It’s hard to imagine a Star Wars feature film without this little astromech droid, and it’s great to see a familiar friend returning to the big screen in 2015.

The other two guys pictured are Lee Towersey and Oliver Steeples, Star Wars fans and members of the worldwide R2-D2 Builders Club.

Glad to see the return of a classic character to the big screen for the next installment of Star Wars.

Rey has undoubtedly won the hearts of millions of Star Wars fans the world over. So much so, that action figures and other toys based around the character are very difficult to find. She’s definitely one […]