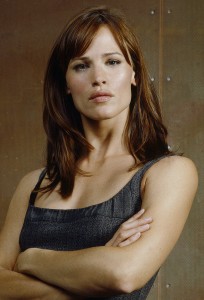 The New York Times interviewed J.J. Abrams regarding his upcoming book, S., which was written by Doug Dorst, based on a story that he wrote.  In the interview, he mentions his favorite character that he created is still Sydney Bristow from Alias.

Of all the characters you’ve written across different media, who is your favorite?

I suppose my favorite that I’ve created was Sydney Bristow, the central character from the TV series “Alias.” She was a character with a secret, and that is always a fun place to start. I love how she was sweet and romantic and looked like the girl next door, but was also lethal and brave as hell, and would do nearly everything for love of country. But she wasn’t a superhero; she was terrified at almost every step. But still, she would do the right thing. I think we would all like to believe we would behave like that when the going gets rough. Also, we had Jennifer Garner playing the role, and she elevated absolutely everything.

Who are your favorite novelists?

My knee-jerk answer: Mark Twain for his amazing use of language and humor, and H. G. Wells for his wild, prescient imagination. I want to say Salinger, too, but all this is making me sound like I’m still in junior high. I have a great affection for the writing of Graham Greene and am amazed by the soul and poetry of Colum McCann. And I can’t tell which is more incredible: how Stephen King can grab you by the throat in whatever damn genre he’s writing in, or that as soon as you’ve finished his latest novel, he’s published another one. His skill and prolificacy is otherworldly. Like, maybe literally.

Read the full interview at the New York Times.

Stranger teaser from Bad Robot Productions, what is it?

On August 19th, Bad Robot Productions posted a teaser called “STRANGER” on YouTube.  It set the internet on fire, with over 2.5 million views in about seven days. What’s it all about?  Well, quite possibly, […]