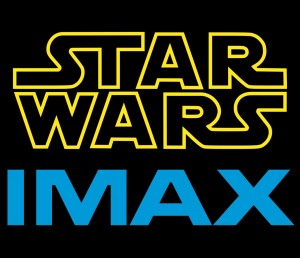 Disney and IMAX have announced an expanded relationship, which includes bringing Star Wars: Episode VII to IMAX when it is released on December 18, 2015. This announcement comes only a couple of months after Abrams announced that he wouldn’t be shooting any of the film in IMAX, specifically, saying, “The problem with IMAX is it’s a very loud camera, it’s a very unreliable camera, there’s only so much film that can be in the camera. You can’t really do intimate scenes with it. It’s slow. They break down often.”

That being said, I am very excited about this deal, as only a few Star Wars film have been released in IMAX, including Star Wars: Episode III – Revenge of the Sith.

Blockbuster Titles, Including Star Wars: Episode VII, Marvel’s Captain America: The Winter Soldier and Marvel’s Avengers: Age of Ultron, Will Come to Life in The IMAX Experience®
LOS ANGELES – March 20, 2014 – IMAX Corporation (NYSE:IMAX; TSX:IMX) and The Walt Disney Studios, a division of The Walt Disney Company (NYSE: DIS), today announced an agreement to release several of Disney’s upcoming films in IMAX® theatres under an extension of the companies’ long-running relationship.

Under the agreement, IMAX will be part of Disney’s release strategy for its most highly-anticipated live-action tentpole films, including Marvel’s Captain America: The Winter Soldier (April 2014), Maleficent (May 2014), Marvel’s Guardians of the Galaxy (August 2014), and Marvel’s Avengers: Age of Ultron (May 2015), Tomorrowland (May 2015) and Star Wars: Episode VII (December 2015).

“Disney has enjoyed a terrific ongoing collaboration with IMAX, and we are thrilled to extend this relationship with a collection of exciting, highly anticipated cinematic events that are perfect for the immersive IMAX format,” said Alan Bergman, President, The Walt Disney Studios.

“For the last several years, Disney and IMAX have worked together to deliver extraordinary cinematic experiences to audiences around the world,” said IMAX CEO Richard L. Gelfond.

“The combination of the great product being created by Disney and the overwhelming enthusiasm of moviegoers to see films in IMAX theatres makes this agreement really exciting.”

“Disney’s and Marvel’s larger-than-life characters and dynamic universes clearly resonate with our core audiences,” said Greg Foster, Senior Executive Vice President of IMAX Corp. and CEO of IMAX Entertainment. “We are delighted to build upon this longtime association and continue to collaborate to bring many of the most iconic and cutting-edge properties in the world to life in the most immersive way possible.”

Rey has undoubtedly won the hearts of millions of Star Wars fans the world over. So much so, that action figures and other toys based around the character are very difficult to find. She’s definitely one […]

The first teaser trailer for Star Wars: The Force Awakens is imminent. Rumor has it that it will be showing up sooner than we think. Last weekend, John Williams may have even recorded new music specifically […]