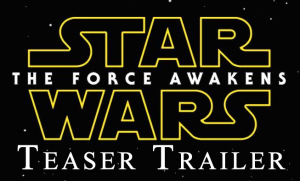 The first teaser trailer for Star Wars: The Force Awakens is imminent. Rumor has it that it will be showing up sooner than we think. Last weekend, John Williams may have even recorded new music specifically for the teaser.

And now there is a possible description for the teaser. Here’s what the report from Badass Digest says:

What’s it going to be like? If my sources are correct (and this is a big IF. These sources have been mighty reliable in the past, and if they’re wrong I believe they’re wrong honestly, i.e. they’re not b.s.ing me), it’ll be short. And when I say short, I mean one minute long. It’s going to have The Force Theme played on woodwinds, softly, over flashing images of the main leads, each fading to black. There’s no dialogue, just reveals of the characters. And then the music swells up into a full orchestral piece – perhaps what John Williams recorded this weekend? – and we hear a female voice, likely Daisy Ridley‘s, saying “Wake up.”

And then the title card appears – Star Wars: The Force Awakens – and we see the Millennium Falcon, firing blasters, coming right at the camera.

There are some other trailer descriptions out there, but as I’ve said before, if this turns out to be true, it’s only based on the teaser and not really spoiler material. I’m trying to keep myself spoiler-free for the movie as much as possible, only watching trailers and viewing official photos and posters released from LucasFilm/Disney.

We’ve been patiently waiting for this announcement, and now we have it. Han Solo, Princess Leia, Luke Skywalker, C-3PO, Chewbacca and R2-D2 are all returning to the galaxy far, far away, along a new cast […]