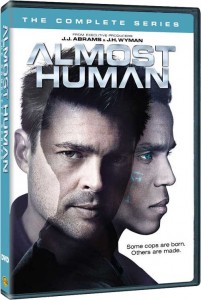 Warner Brothers has released Almost Human on DVD, today, without any prior announcement that I have seen. In fact, it’s been released via the Warner Archive Collection, meaning it’s a video-on-demand title.

These are burned DVD-R discs. This means that, even though the show was released in HD, its’ only available in standard definition, unless you buy it from Amazon via streaming: Almost Human: The Complete First Season [HD]

In this action-packed show set in 2048, a worse-for-wear cop teams up with a second-hand synthetic android to fight a strain of urban crime that’s evolved in ever more frightening ways. Detective John Kennex survived a catastrophic attack on the city’s police department that cost him nearly everything. Returning over a year later, he finds the transition difficult. Not only does he suffer guilt for the lethal ambush, but department policy now requires that every cop be paired with a highly evolved human-like android partner.

Rejecting policy, Kennex reinstates an outdated Dorian android – whose somewhat dysfunctional platform is based on a “Synthetic Soul” program, allowing it to have emotional responses. It’s this flawed humanity, however, that connects Dorian and John. And together, they set out to keep the city safe, uncover the criminal conspiracy that threatens to destroy their world…and find their common humanity.

Almost Human cancelled by Fox after one season

Fox can’t seem to keep their J.J. Abrams shows alive for more than one season. In 2012, Fox had Abrams’ Alcatraz, and cancelled it after one season, and they’ve just followed that up by cancelling […]

Fox has released this new promo for “Almost Human,” which will have a special two-night series premiere on Sunday, November 17, and Monday, November 18. From Emmy Award-winning executive producer J.J. Abrams (“Fringe,” “Lost,” “Revolution,” […]