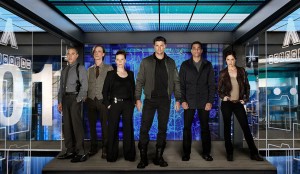 J.J. Abrams spoke with The Wrap about the upcoming TV series, Almost Human. “The future lets you tell a story that’s not quite anything you’ve seen before,” executive producer Abrams says.

Abrams’ interview has inter-cut scenes from the debut episode of the new Fox drama and behind-the-scenes footage from the set. The “Lost” co-creator is fascinated by the possibilities offered by a story set three decades from now.

“It allows you to do some really cool stuff. It also allows you to have hyper-real stories,” Abrams continued. “Stories about bad guys that are doing things that are scarier, larger, more unexpected than you could do today.”

J.J. Abrams knows how to make a project go viral.  His first book, written with Doug Dorst, had a teaser that had many people talking, and well over 2 million views in three weeks.  A […]

Stranger teaser from Bad Robot Productions, what is it?

On August 19th, Bad Robot Productions posted a teaser called “STRANGER” on YouTube.  It set the internet on fire, with over 2.5 million views in about seven days. What’s it all about?  Well, quite possibly, […]