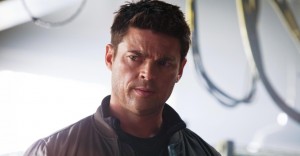 Almost Human looks like a show with the potential to be another Alias or Fringe from J.J. Abrams and J.H. Wyman.  Now Fox is giving Almost Human a special two-night launch!

It was originally scheduled to premiere on Monday, November 4. Almost Human will now debut on Sunday, Nov. 17 after Sunday Night Football. The second episode will air the following day in its regular timeslot at 8/7c preceding Sleepy Hollow.

Almost Human is set in a future in which LAPD officers like John Kennex (Karl Urban) are partnered with highly evolved human-like androids like Dorian (Michael Ealy).

Bones will continue to air with Sleepy Hollow for an additional two weeks before moving to Fridays on Nov. 15.