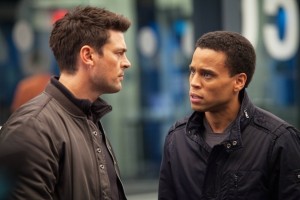 Fox and Eventful have announced a contest to bring an exclusive free screening of the premiere episode of the new series “Almost Human” to three winning cities. Vote today!

BRING THE FUTURISTIC THRILL-RIDE OF “ALMOST HUMAN” TO YOUR CITY!

FOX AND EVENTFUL CHALLENGE FANS TO DEMAND “ALMOST HUMAN” WITH

FOX and Eventful are giving fans in three winning cities that Demand it! the most, an advance screening of FOX’s fun, adrenaline-fueled drama ALMOST HUMAN. FOX is putting the power in the hands of the fans to Demand it! and win an exclusive free screening of ALMOST HUMAN anywhere in the country before it premieres Monday, Nov. 4(8:00-9:00 PM ET/PT) on FOX.

ALMOST HUMAN fans can vote for their cities online NOW at http://eventful.com/almosthuman. In the three cities that receive the highest online vote tally by Wednesday, Oct. 23 at 5:00 PM PT, FOX will host a free advance screening of ALMOST HUMAN at a local theater. Any city in the country has a chance to make it to the Top Three!

ALMOST HUMAN is produced by Bonanza Productions Inc., in association with Bad Robot Productions and Warner Bros. Television. The series was created by J.H. Wyman, who wrote the pilot. The series is executive-produced by J.J. Abrams, Wyman and Bryan Burk. Kathy Lingg (“Person Of Interest,” “Revolution,” “Fringe”) and Reid Shane (“Fringe”) are co-executive producers. Brad Anderson (“Fringe,” “The Killing”) directed and served as co-executive producer on the pilot. “Like” ALMOST HUMAN on Facebook at Facebook.com/AlmostHumanFOX. Follow the series on Twitter @AlmostHumanFOX and join the discussion using #almosthuman. See photos and videos on Instagram by following @AlmostHumanFOX.

Almost Human cancelled by Fox after one season

Fox can’t seem to keep their J.J. Abrams shows alive for more than one season. In 2012, Fox had Abrams’ Alcatraz, and cancelled it after one season, and they’ve just followed that up by cancelling […]