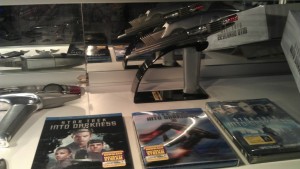 The release party for the Star Trek Into Darkness Blu-ray lead to more interviews.  People weren’t allowed to ask questions about Star Wars: Episode VII, but that’s no big deal… we’ll have plenty of time to learn about that movie over the next couple of years as we wait for it to come out.  In the meantime, Geek Nation got the opportunity to speak to J.J. Abrams, Michael Giacchino and Simon Pegg.  Here’s what Abrams said.  You’ll have to go to Geek Nation for the rest.

First up, if he had to choose one particular element of Star Trek that convinced him to return to direct this sequel, what was it?

“It was the cast originally, because I just wanted to work with them again. But then we started talking about what the story would be, I was just getting very excited about the possibilities of doing – the idea of being able to bring Khan back. The idea of this black stealth version of the Enterprise was interesting to me. The idea of doing a chase scene in San Francisco. The idea of having a future San Francisco. It was a bunch of elements.”

On a project of this magnitude, when there’s so much pressure on the filmmaker to deliver a successful final product and so much money at stake, I wondered how much room Abrams had to experiment and try new things:

“I would argue, honestly, an incredible amount. We have crazy limits all the time on every movie, and you always think, ‘Oh, it’s got a big budget and therefore…’ you know. But honestly, the ability to say, ‘You know what would be really cool?’ and then figure out a way to make it happen, I don’t think I can imagine a more wide open opportunity than this. Part of the fun of this movie was being able to do that time and again – even last minute stuff, we were able to pull off.”

Since Abrams has become inextricably tied to the concept of the “mystery box” after his TED Talk and issue of Wired, I had to know how much of that concept the director felt defined his work, for better or worse:

“I think people might misread the mystery box thing as some kind of approach I take to making stories. It was really a deconstruction of what that mystery box – which is simply a mystery box that I haven’t opened that has magic in it – into how the idea of the box meaning the movie theater and what you might see, what you hope to see. That feeling of anticipation. What the TV, what the computer is when you’re going to either watch something or write something. What might be inside that thing, either as a point of creation or as a point of consuming entertainment? So I don’t ever look at a story and go, ‘Wait, wait. Stop everyone. Stop for a minute. Take the mystery box approach.’ [Laughs] I don’t think of the mystery box as a kind of format or a formula, but I do feel like anyone, any story you tell, or any story you watch that you like, makes you lean in and ask questions. That is simply a result of compelling moments that don’t have all the answers in front of you that make you want the answers. There’s nothing worse than going to see a movie where exposition is given about something that you don’t care about, and you just feel like, ‘Ugh. Now I’m being told, now I’m supposed to feel this.’ And it’s not an experience, but an exercise in being frustrated by bad storytelling.”

After thanking J.J. for “Lost” (“Oh, that’s sweet of you. I’ll tell Damon and Carlton you said so.”) and thanking him for his time, it was off to the party, where we ate Trek-themed ice cream (the best flavor was called “Starchip Enterprise”) and drank vodka slush drinks frozen with liquid nitrogen (not kidding).
Via Geek Nation 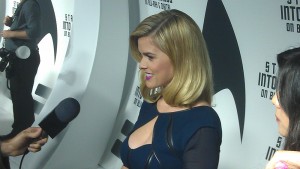 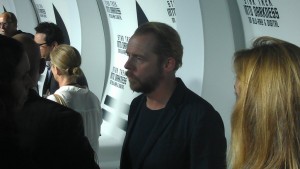 J.J. Abrams knows how to make a project go viral.  His first book, written with Doug Dorst, had a teaser that had many people talking, and well over 2 million views in three weeks.  A […]