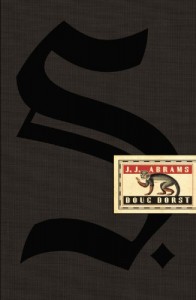 J.J. Abrams has managed to bring great TV shows to the small screen, great movies to the big screen, and now he’s likely going to bring great novels to the book shelf.  After a book that was supposed to be a big piece of Lost didn’t pan out as well as they’d hoped, it looks like this one won’t be a misfire. “In all fairness, the book was written by Doug Dorst,” Abrams points out. “It was based on an idea that I had that we developed together, but I don’t want to take credit for writing the book. He wrote the book and it is an extraordinary thing that he’s done.”

One book. Two readers. A world of mystery, menace, and desire.

A young woman picks up a book left behind by a stranger. Inside it are his margin notes, which reveal a reader entranced by the story and by its mysterious author. She responds with notes of her own, leaving the book for the stranger, and so begins an unlikely conversation that plunges them both into the unknown.

The book: Ship of Theseus, the final novel by a prolific but enigmatic writer named V.M. Straka, in which a man with no past is shanghaied onto a strange ship with a monstrous crew and launched onto a disorienting and perilous journey.

The writer: Straka, the incendiary and secretive subject of one of the world’s greatest mysteries, a revolutionary about whom the world knows nothing apart from the words he wrote and the rumors that swirl around him.

The readers: Jennifer and Eric, a college senior and a disgraced grad student, both facing crucial decisions about who they are, who they might become, and how much they’re willing to trust another person with their passions, hurts, and fears.

“It’s a book that, when you get it, comes out of this sleeve and looks like an old library book,” Abrams continues. “When you open it, you see that not only is it an old library book, it’s a novel and that people have written in the margins. You realize that it’s two people writing to each other and that the book was used as a means of communication between these two. It’s an investigation into this mystery and also a love story. Kind of a play on top of a book. There are these pieces of ephemera. Postcards and photographs and maps and letters and things that are actually physical in the book and actually come out. It’s not like any book you’ve seen before, I think. It’s pretty amazing not just what Doug has done but also Little Brown’s Mulholland Books.”

Join Stephen Colbert, host of CBS’ The Late Show With Stephen Colbert, for an evening of conversation and fun with director J.J. Abrams (Star Wars: The Force Awakens, Star Trek, Super 8). This event will […]