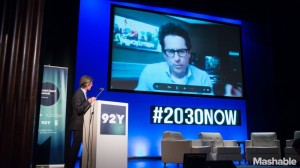 “We really wanted to deepen our connection with the world around us, and to take these entertainment opportunities and make them into something that was even deeper and more meaningful. And even in a few months it’s brought a deeper level of meaning to our work.  We want to be a company that’s going to be part of the solution.  We hope that through watching Revolution that people will become more aware of people living in these conditions.”

Good Robot has inspired changes great and small, from a composting program at the building to topical guest speakers to large scale projects like the Mission Continues with Star Trek: Into Darkness.

Since the movie was set to be released in May, when thousands of troops were scheduled to come, Abrams decided to use the opportunity as a way to honor veterans and highlight the problems they face.

“Could we take a summer action movie — about a crew of Starfleet officers who rise against the threat of terrorism — and shine a spotlight on a real life issue affecting all of us at home?” Abrams wrote in a blog for The Huffington Post.

The crew partnered with the organization the Mission Continues, a nonprofit that gives returning troops a sense of purpose by dispensing them to work on service projects in need of their specific skill sets.  A number of members from the organization appeared in one of the film’s scenes and also shared their experiences with the cast and crew.

As “Episode VII” continues pre-production, Lawrence Kasdan and director J.J. Abrams have assumed screenwriting duties for the film. Kasdan, who has been serving as a consultant on the film, is a veteran of several classic […]