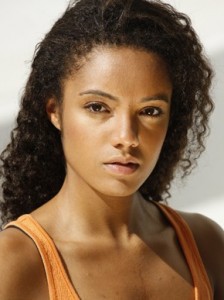 If she is cast in a role, it’ll follow suit with Abrams’ plan to cast relative or complete unknowns in Star Wars: Episode VII. The goal is to create a film where people don’t see people they instantly recognize from many other films, if any at all.

According to The Hollywood Reporter: “Speculation is swirling like the mists of Dagobah around newcomer Maisie Richardson-Sellers. Several sources tell The Hollywood Reporter that she is in line to nab an undisclosed and possibly major role in the high-profile Disney/Lucasfilm production, which is in the middle of an extended casting search in London in advance of a May production start date.”

However, they caution that a couple of their sources have denied that she’s being courted for a role at all. Personally, I like her look as a potential cast member for Star Wars.  What do you think? I know it’s hard to tell from a photo, but in costume, could she have fit in Return of the Jedi?